Trisha Paytas has unleashed yet another troll video – but this time, it’s far less offensive than usual.

Trisha reveals the YouTubers she would bang on YouTube, and has shocked fans by proclaiming her desire to bang accused sexual abusers like Sam Pepper, Onision, and Luke Conard.

She also reveals a YouTuber’s wife called her a “s***”, and even finds the time to officially start a feud with Joey Graceffa.

Danisnotonfire and AmazingPhil – I’ve seen them on YouTubers React. Would NOT bang. Don’t get why girls find those people attractive.

(Although commenters found this very shocking, this is not new information. In fact, she was actually introduced to Dan’s videos two years ago, and was immediately repulsed by his looks.) 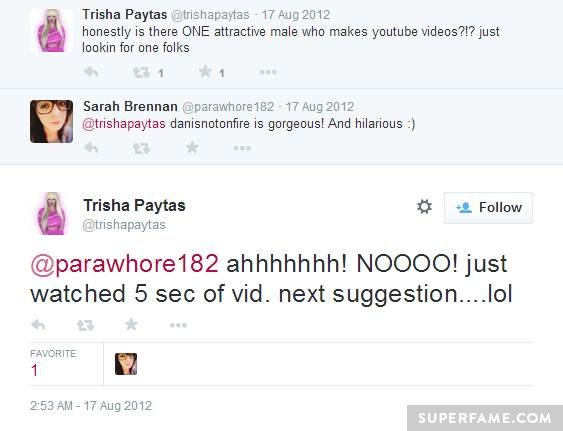 Alli Speed – Don’t even know them.

Trisha Paytas – I would totally bang. Hot as sh*t.

Sam Pepper – He is f*ckable. I don’t think I can get past the way he spits when he talks. He’s hot. I guess he’s a molester now so I shouldn’t say I would bang him. Molester aside, allegedly – I would f*ck him. Wait, I wouldn’t, because he bangs those underage girls – and I always find that a little creepy. So I just changed my mind. I’m an older lady, I don’t think he would be into me. Please don’t share this with him.

The Butlers – Don’t know them.

The Shaytards – Do I have to bang the whole family? I know they don’t believe in sex, but I would bang them. Are we talking about Shay and Colette? Kids? I don’t do the kid thing. Not so much Colette, I like myself some blondes with big t******. Shay, sure! I feel like this is going to get me into trouble.

Charles Trippy – I’m subscribed to him. I never watch his videos, I don’t know why I subscribed to him. Um, definitely would not bang. He’s not attractive. You know, brain cancer and stuff. I also heard he left his wife and there was drama.

DudeLikeHELLA – Wouldn’t bang, not my type.

Phillip DeFranco – Of course would bang, but I got yelled at by his wife years ago – and she called me a s*** and said “What would jesus say”. And he’s obviously married with kids. Looks alone, would totally bang.

Kandee Johnson – Would NOT bang. I’m not into banging people with kids. That’s my general rule. I’m not about to be a step-mommy.

Stacy Burke – Bang, bang, bang. She follows me, she tweets me and she was a former girlfriend of Hugh Hefner. She was like breaking up with her man, and I thought it was my chance to get in on that. Totally bang her.

Electric Glamour – She’s too sweet, virginal almost. I mean, she’s married but I would not. I couldn’t.

JlovesMac1 – I think she’s pretty, but not my type. I don’t think she’s into the taco either.

RemLife – I liked Remy Ashten, then she had like, some heat with me. She unfollowed me, so maybe wouldn’t bang.

Lauren Curtis – You know that girl is a freak! And I would!

SteveGreeneComedy – He has a girlfriend, but looks alone – maybe. Because he wears glasses, which reminds me of Rick Moranis.

Nikki Limo – We’re not BFFs, but she’s really hot. She has great thighs and an a**. I don’t think we have that chemistry or spark of sexual attraction, but probably!

Strawburry17 – Would not bang her. I have a really love-hate relationship with her. She’s addicting, what can I say?

Gigi Gorgeous – Bang. I am all up on that lesbian love – I love her! I think its why I have to keep away from her. Sometimes when I’m with her, I want to make out. We have made out. Just saying.

TheFineBrothers – I would bang Rafi, not Benny. In person, Benny and I did not have that spark, even if he does have glasses, which I like. Rafi, wanna get down? They are hot.

WatchUsLiveAndStuff – Kalel and Anthony – I would bang Kalel. Anthony is very tiny. I like my women tiny, but my men a little…you know. I’m a larger girl, so I can’t have an extra small man. They are both vegans, and I don’t think we would mesh well. But Kalel’s hot.

Grav3yardgirl – I would, but I don’t think she would be into me.

EpicMealTime – I wouldn’t bang, but he is super sweet.

Frankie J. Grande – Would not bang! Why am I even subscribed to him? I haven’t even seen a video.

Shannon Rose – Bang! Former adult star? Yes, please sit on my face. Her and her boyfriend have a channel.

Onision – Would bang. I mean he’s a little crazy, too. Based off looks, would bang.

Viewers React to Her Choices

Not surprisingly, her latest troll video elicited many strong responses.

One fan branded her a “hypocrite”, saying that Trisha cried when Nicole Guerriero did the same thing to her.

Other fans were personally insulted that Trisha would not bang their faves.

Then there were the desperate fans, who implored Trisha to show her b******.

Others complimented her beauty.

Many viewers took offence to the fact that she would not bang Dan or Phil.

Do you think Trisha has good taste in men? Comment below!