It’s the midweek point, and Troye Sivan has been eagerly watching the charts all around the world.

Update: It’s now official. Click here to see where he debuted on Billboard.

Just today, he was seen on Twitter urging fans to buy more physical copies of his EP WILD in Australia for a better chance at a #1 Australian debut. 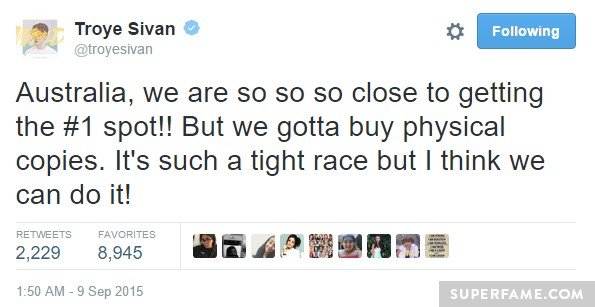 On the other side of the world, HDD predicts that Troye Sivan will move around 45-50k copies (pure sales), or 50-55k copies (sales plus streaming) in his first week.

These numbers put him on track to debut at around #5, below Five Finger Death Punch, The Weeknd, Travis Scott and Iron Maiden.

How Do These Numbers Compare to His Fellow Social Stars?

This time around, Troye has embarked on a more ambitious marketing campaign, and has an entire tracking week. He even got a boost from celebrities like Taylor Swift and Harry Styles.