It’s no secret that many popular YouTubers, Viners and Instagram models enjoy smoking a bit of marijuana.

Update: Confirmed! Maggie Lindemann confirmed that she was smoking weed.

YouTuber Hannah Hart is one of YouTube’s most famous weed smokers. YouTube star Twaimz also previously revealed that he enjoys smoking a bit of cannabis.

Nash Grier is another famous pot-loving Viner. Fans have spotted Nash wielding all types of suspicious-looking blunts in his various social media posts. In fact, on Twitter, a video recently emerged of Nash smoking out of a DIY water bottle bong!

Taylor Caniff, who claims he doesn’t smoke at all, was charged with multiple felony marijuana charges – since it’s still illegal in Indiana.

In another black-and-white shot, it appears that her good friend Lohanthony can be seen lounging around in the background.

In fact, just a few weeks ago, Maggie made fun of Zac Efron for wearing weed-themed boxers. “We get it! You smoke weed!” 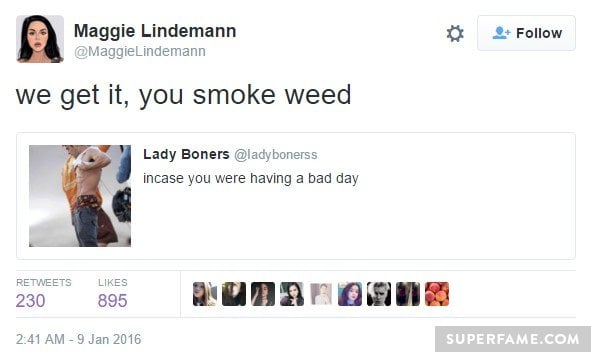 Maggie’s fans are currently split on this revelation – but most fans defended her. “It’s completely legal if it’s medicinal!”